Know this before seeing the Tai Hang Fire Dragon

It’s Mid-Autumn Festival, and it’s time for the Fire Dragon of Tai Hang to come out.

The tradition began in 1880, when a small village of fishermen and farmers in Tai Hang was hit by a typhoon and a plague. The legend has it that a soothsayer declared that only staging a fire dance of a dragon would clear the disaster of the village, so the villagers built a dragon with straws and lit it with incense for three days and three nights, and the plague was cleared.

Over a century later, the 67-metre Fire Dragon still dances through the streets of Tai Hang every year, with over 300 performers and 70,000 incense sticks.

If you are planning to see this ancient ritual this month, here are some tips for you.

1. For the best view, go to Wun Sha Street.
And get there early. The road will be packed full of people and you won’t be able to see much behind the crowds. There will be drummers  keeping the mood upbeat and building up the anticipation, but still take some snacks and be prepared to wait for a long time for the dragon to come out.

2.  If you want to see the dragon being prepared, go to Ormsby Street. You’ll be able to catch the incense sticks being lit and put on the body of the dragon. 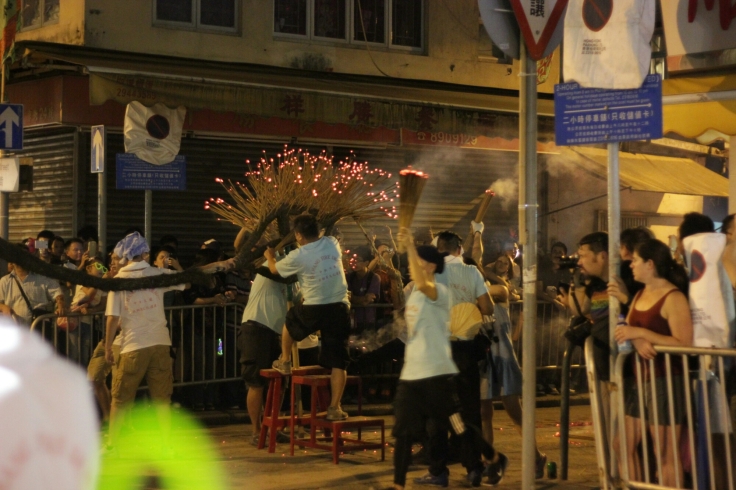 3. Don’t worry too much if you haven’t managed to find a spot in Wun Sha Street. After the dragon has danced in the main road, it will start weaving in and out of smaller streets of Tai Hang. If you are hanging out in one of these streets, it’s guaranteed the dragon will pass by within your sight at least several times. There are lesser crowd so you might even be closer to the dragon than you would have in Wun Sha Street.

4. If it’s your first time in Tai Hang, check out Lab Made for liquid nitrogen ice cream. It’s Hong Kong’s first ever place to serve ice cream frozen at -196 celcius with liquid nitrogen, and watching dramatic clouds of white mist is a treat in itself. Flavours are innovative and change regularly. When I went on 27 September 2015, they had Moon cake, Apple Crumble, Mango & Pineapple Greek Yoghurt, and Hojicha latte. (6 Brown Street, Tai Hang)