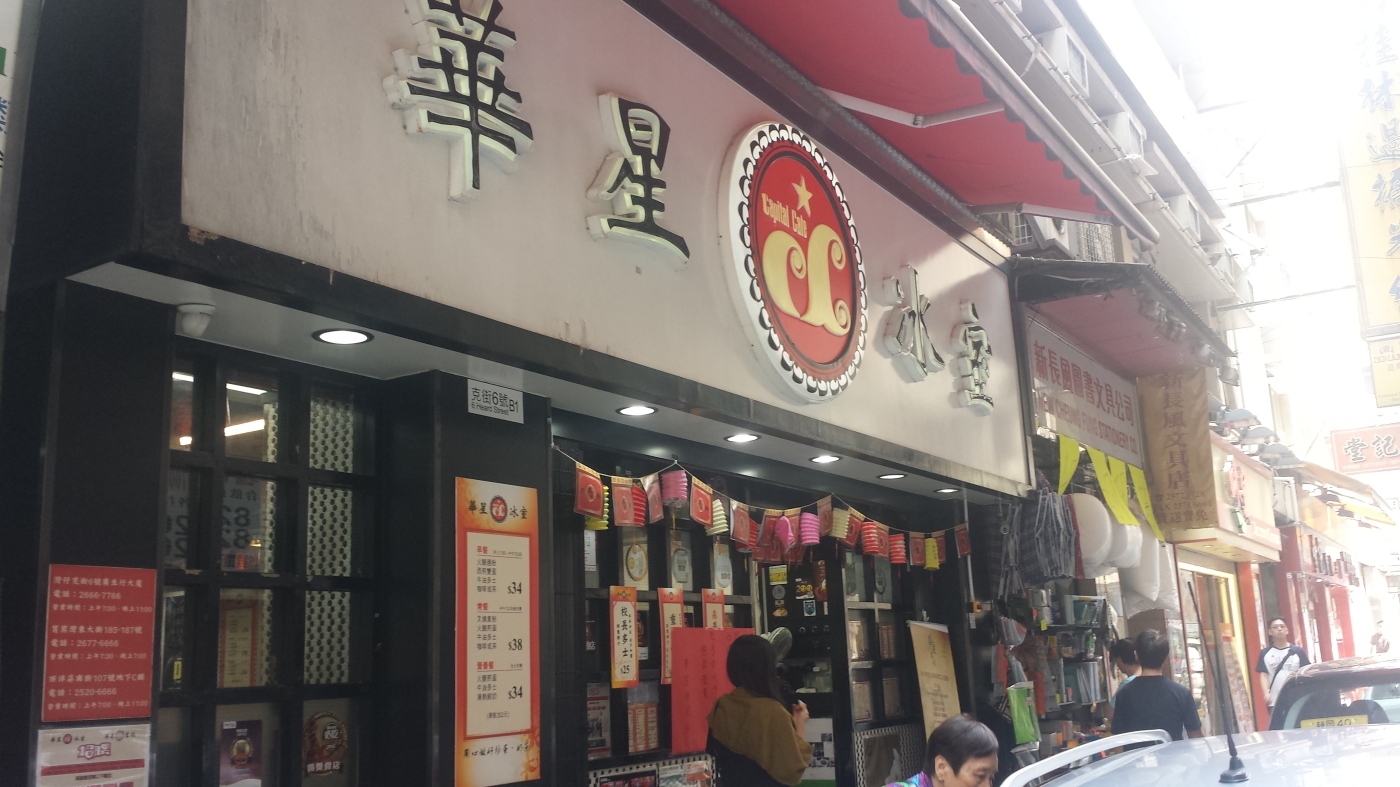 I’ve been at home most of the time during the weekdays researching, writing and applying for jobs in Hong Kong, and I’ve just had enough of staying put.

So I decide to go to Wan Chai and do my own food marathon without my usual local friend. Stop-number-one would be a light lunch in a budget restaurant followed by some street food and Taiwanese dessert.

My series of food marathons, as gluttonous as I may come across, has its well-found reasons.

In the space of three weeks of being in Hong Kong, I have already developed a certain routine. During the weekdays I only have two meals a day to stay within my food budget of 3.00 GBP per meal. I cook my dinner once or twice a week in large portions, which I heat and reheat for my brunches in the next following few days. Saves time and saves money. Having the same menu three days in a row isn’t too bad once I ‘turn-off’ my appetite and dutifully finish off what I need to finish off.

But during the weekends it’s a different story. Going skint during the weekdays allows me to go on a foodie-spree without feeling guilty too much. It’s still within my low budget but finding cheap and cheerful food here isn’t that difficult.

Coming out to Wan Chai on this Sunday afternoon feels like a treat, although it’s only a 15 minute bus ride from home. Just like my boring, monotonous weekdays I also stayed at home on Saturday, trying to meet translation deadline as well as recovering from a hangover and 6 hours of clubbing in Lan Kwai Fong on Friday. So today I am so so ready to go crazy on food.

Capital Cafe has been voted as the Best Restaurant in Wan Chai (2011-15) and the Best Hong Kong Style Tea Restaurant (2014-15), and it doesn’t take that long to find it. It serves traditional Hong Kongese comfort food, and having been to a similar one in my previous food marathon, the menus weren’t so strange anymore (Spaghetti in Chinese broth for example).

With run-down decor and photos of de-appetizing food, it reminds me of those cheap cafes in Britain that attracts big burly men (soggy toasts and massive portions of English breakfast with baked beans brimming over the plate..), but these retro-cafes in Hong Kong actually draws in a lot more diverse range of customers – from tourists, families, old men in scrawny work outfits to young ladies in their silk blouse and leather wallets.

I walk in and say yigeren (one person), and the waiter ushers me to the empty seat at a table of four. Three Asian tourists are already having their meal at this table, and I feel a little awkward as if I am intruding. But my local friend had already forewarned me that this would happen a lot in Hong Kong.

As soon as I am seated, the waiter stands next to me with his paper pad and pen in hand, ready to take my order. I guess the locals often come in already knowing what they will be having. Cafes like this have very similar menus and drinks: toasts with over 15 different kinds of toping, scrambled eggs, buns, teas and coffees, and that spaghetti-broth thing. 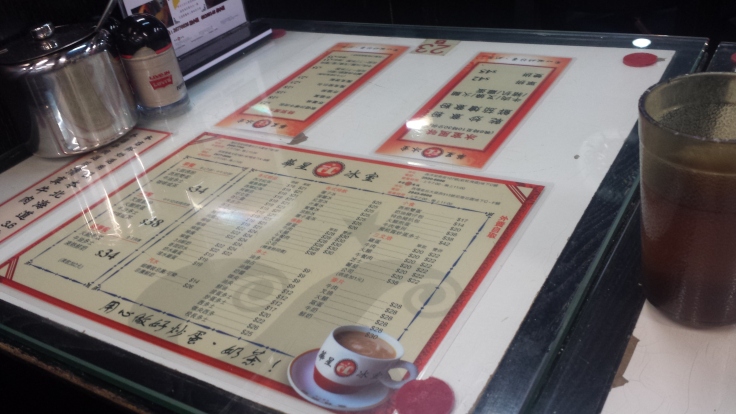 I quickly scan the tables around me to see if there is any one particular food that is popular here, but there doesn’t seem to be any predominant preference. So as always I go for what I’ve never had before: traditional Hong Kong milk tea and toast with condensed milk and peanut butter.

“Just one?” the waiter asks. Thinking perhaps it’s not enough, I order pork bun as well. I think I read it in a review of the place as one of the recommendations.

I am slightly ashamed I haven’t yet tried Hong Kong milk tea as it seems to be the beverage of Hong Kong. It’s only black tea with condensed or evaporated milk, not impossible to replicate the recipe anywhere else in the world, but it just feels more authentic to have in a traditional cafe like this. The tea arrives in a cheap white plastic cup, and it does not disappoint. Its subtle sweetness and rich and creamy texture against bitter black tea is so satisfying to the point it is comforting. 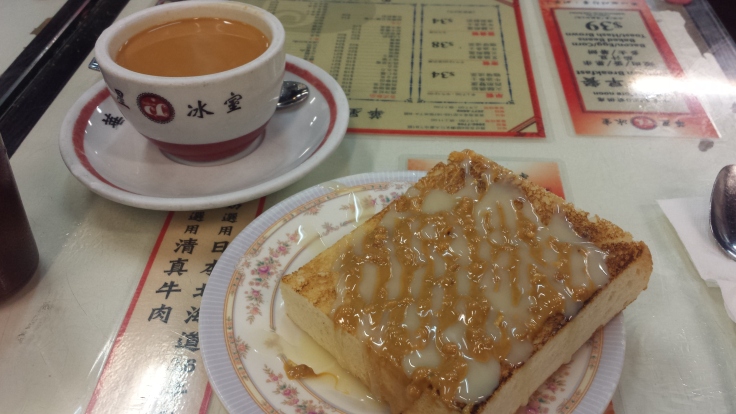 Pork is really well fried, and it even has some fresh lettuce in the bun. ‘Greasy and Satisfying’ isn’t usually a word combination I would use, but very fitting in this instance. 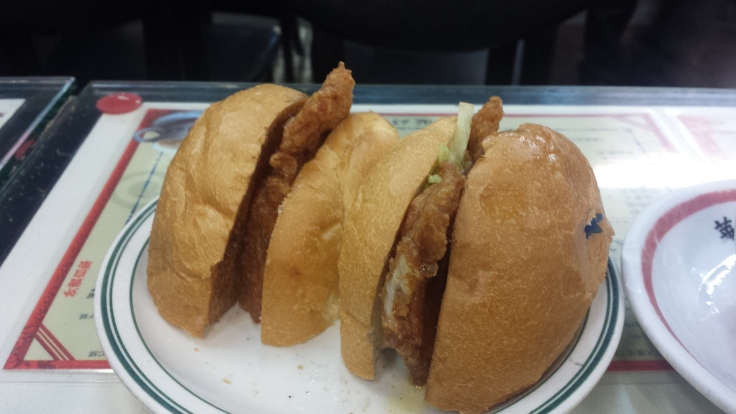 Portions are very generous, which messes up my plan to visit milk restaurant and dessert cafe afterwards, but I am full and I am happy. All for the cost of mere £4.80.

By the time I am finished, the three tourists have already left the table and a middle aged man takes a seat in front of me. But I no longer feel so award being seated together with a stranger.

I take a piece of paper on my table, with cryptic looking  ’48’ scribbled on top. Three weeks in Hong Kong and I now know it’s my bill. I take it to the counter and expertly take out two blue 20 dollar notes and one red 10 dollar note without any faffing about. I know all my notes and coins by now. I say ‘M Goi (thank you)’ and walk out the restaurant, feeling childishly proud of myself at this ‘achievement’ of localisation. The exterior of Moyo doesn’t give much away. Black. Simple. Chic. Who would have thought it was a Korean restaurant? If you’ve managed to find this little gem in on Aberdeen Street in Central, then you’re in for a treat.

This Korean-Italian fusion place is not only unique with its innovative menus, but some its drink selections are only available here in Hong Kong. 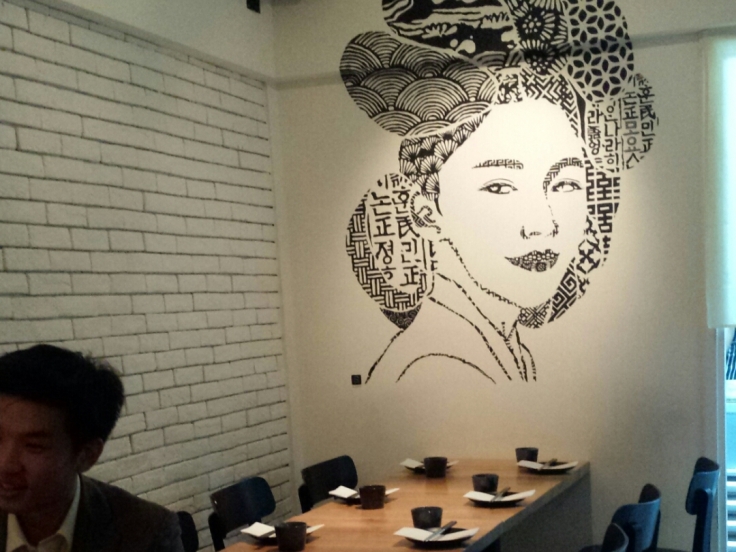 The menu has a mix of traditional and fusion dishes. Bulgogi (beef marinated in a mixture of soy sauce, sesame oil, black pepper, garlic, onions, ginger) and Sundubu (spicy tofu stew) for example, are what you would expect in a traditional Korean restaurants. Beef was juicy and chewy, and tofu stew full of spice to satisfy any Korean palette. 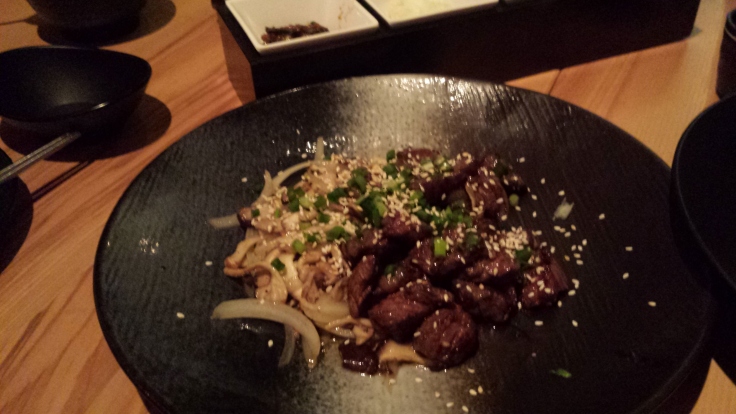 The menu offers three different types of pancakes, and we tried Kimchi pancakes which was hearty and well fried, with fiery chilly pieces inside.

The most interesting dish was carbonara tteokbokki, which is Korean rice cake topped with the Italian classic sauce. It’s an interesting combination, but perhaps a little too rich to have it by itself.

Other fusion dishes on the menu include Kimchi Bruschetta, Makgeolli Drunken Clams, and Pesto Rice Cakes.

The drinks are as interesting as the food menu. Along with standard soju and makgeoli, Moyo also stocks soju at 17% 25% 40% 41%. Ilpoon Jinro, for example, is a premium soju distilled in oak barrels for 10 years. It’s a whiskey-like drink with some caramel notes, taken either neat or with soda.

We tried yuzu soju which we absolutely loved. Sweet and refreshing, it was totally a girl’s drink.

All Moyo’s cocktails are soju based, but if soju isn’t your think, they also have Korean pale ale, 7bräu craft beer, and a selection of rice drinks. It will also soon stock grapefruit soju as well, and will become the only place in Hong Kong where you can have a taste of it.

Moyo is nothing like regular Korean places you find in Tsim Sha Tsui. You would never, ever hear a single tune of K-pop playing here for example. Targeted towards expats and bankers frequenting Soho, it’s a stylish and vibrant place definitely worth a visit.

Dinner only
Tip:Visit on Monday-Thursday if you want a quieter dinning experience